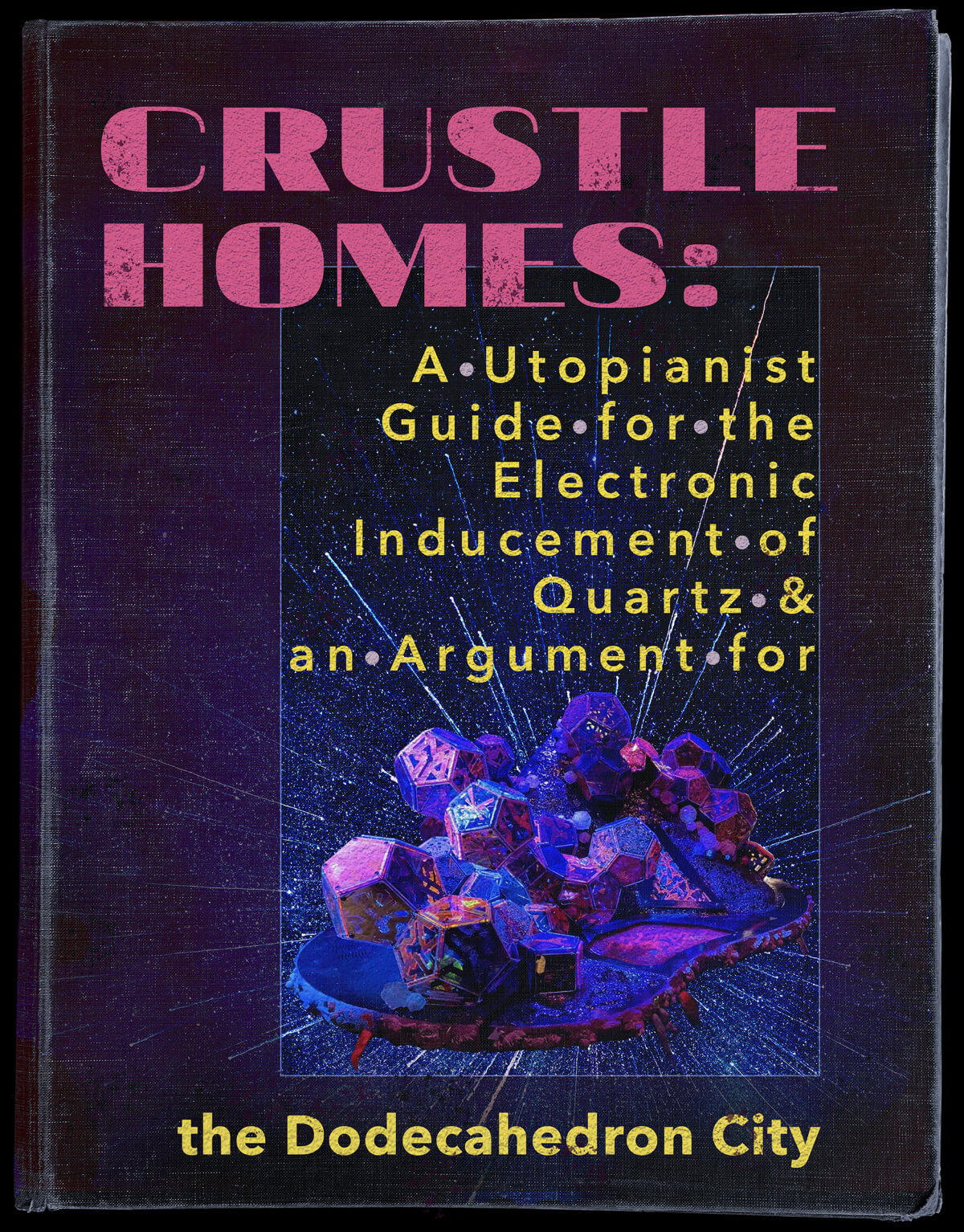 Hey so I’m an architecture major with a minor in materials science. For my thesis this quarter I’m writing a survey on mineralogy and how it’s been applied to architecture throughout history.

On Friday I was in the library (that’s right, ladies), researching examples of quartz as a flooring material, and I found a book by this guy named Stuart Crustle. It’s embossed with an image of a quartz crystal, housed inside a dodecahedron. There’s no publishing information, only a date stamp of 1982.

This. Guy. Is. A. Trip. I can’t believe I never heard of him. Get a load of the title: “Crustle Homes: A Utopianist Guide for the Electronic Inducement of Quartz and an Argument for the Dodecahedron City.”

Essentially, Crustle says you can shock common quartz and use its natural electrical resonances to shape it into something other than a chunk of stone. Rather than build a home, one would instead program a home into the rock itself! Quartz could be shaped into homes that repeat in patterns following the electrical whims of Crustle’s machine.

And then it gets even weirder!

Crustle proposes that his technology would bring about a new age for humankind. Housing scarcity would cease to be. Humanity would no longer pillage the forests for building materials, instead summoning buildings out of quartz, the most common element on the planet. Workers could retire in leisure. Homes and security would be available to all. Humanity would begin a millennia of rest and relaxation, working perhaps as little as three hours a week.

“Any sufficiently-advanced society would have technology that would not merely build its creations, but grow them from the Earth itself.”

Here’s the thing, he doesn’t describe how this tech works. There’s no diagram of the machine, no experimental notes. Nothing that detailed. I did find some of his concept drawings for Dodecahedron City, but they don’t look like professional architecture designs to me. I think this guy just really liked d20s? Haha.

I seem to have found a very interesting crank. Has anyone ever heard of this guy? You’d think there’d at least be a podcast or something on him. Anything?

God! I love weirdo outsider artists and couldn’t believe I never heard of this guy before. It is so strange!

I did a search for “Crustle” and “Quartz Inducement” on the U.S. Patent Office’s web site and it looks like he must have had at least a couple fans. Check out this patent application I found for a Quartz Inducer. It was filed six years ago. Looks like the office rejected it. I can’t imagine why! lolololol

Can’t wait to drop this on my partner. Thanks for the rabbit hole, friend! I gave you some gold.

YOU GUYS! THESE PEOPLE ARE LEGIT(imately out there trying to make Quartz crystal grow!)

I ran some of the company names from TankLoydWright’s patent office form and found an article on Crustle Tech and their projects. It’s old – from the 90’s. This is literally the only unbroken link on the entire web site. Holy smokes I can’t believe this is real. Pasting the text below:

THE STREAM — The island, as it was before, was a blank landscape of quartz with an albedo that demands one wears sunglasses during every hour of daylight.

Crustle architects pull up to the job site in a van. As they come to a stop the dodecahedron installed on the top of the van bobs forwards and backwards in a “yes” motion. The hatch, opening with a pneumatic hiss as the van comes to a stop, lets the fierce daylight shine on banks of computer screens, wires, keyboards covered in plastic covers to keep the grease off.

Two people, members of the often-esteemed, often-criticized firm CRUSTLE ARCHITECTS, step out of the van and look over the field of quartz. Soon, the gleaming rock would be changed into a line of dodecahedron-shaped villas, Crustle’s signature style, stretching over the arc of the horizon.

The sound of the architect’s work boots landing on a thin layer of quartz sand.

“Our practice uses crystalline pyrite or “quartz.” It’s an abundant mineral and one of the easiest ways to store digital information,” said Crustle Tech 1, who hasn’t stopped talking about quartz since the trip began. This lifelong obsession began back at science camp. They wear the structural diagram for silicon dioxide on a necklace.

Crustle Tech 2 pops the hatch to the van and takes out a two-handled drill with a slender, 36-inch diamond-tipped bit. Spitting his gum into the scintillating landscape, he slips his protective goggles over his eyes and sets to work drilling holes into the island’s crystalline surface. Tech 1 drums her fingertips on the computer console, waiting for a flash drive to connect. Blueprints of the island development appeared onscreen.

“It was a very harmonious process,” they said, gesturing at the design.  “And successful because our team was so small. We ideated for 15 minutes and then we were ready to begin.”

Crustle Tech 2 returns to the van and comes out with long cables that look like speaker wires. To these he wires a copper probe and flicks them with his index finger like a needle at the doctors office. A line on the computer console jumps with the impact.

“As artists we take things and move them to other places,” he said. “Technology makes this more efficient.”

Each of the probes finds a home in the holes Crustle drilled in the surface. Technician 1 flips a conspicuous switch on the center console before checking the text messages on their phone.

“We think the epitome of technology, the epitome of design would be to affect the way things grow. An advanced civilization, a real good one, would be able to code the fabric of the universe to perfectly suit their needs.”

“Hedron Crustle, our ideological forebear, thought dodecahedrons were the universe’s perfect shape,” said Tech 2. “They represent infinity because you could theoretically stand at one corner and travel endlessly around the surface without ever touching an opposing corner.”

“Infinitely variable, even though each is a shape with 12 sides. We like dodecahedrons.,” Tech 1 adds.

For being infinite, they look pretty similar.

The process of creating a Crustle development is like defragmenting your hard drive. Code from the master blueprint is stored in the quartz itself. As this happens, the landscape cleaves, snaps, and rises into the sky as dodecahedrons shaped under the direction of a computer program.

I listen, taking in the sound. I suppose “Crustle” could also be an onomatopoeia. In an hour or two, the first developments rise. The team will be here all night. Technician 1 tunes their mandolin while Tech 2 heaves a cooler of beverages from the back of the van.

If these homes follow a pre-designated path, isn’t the process derivative? Tech 2 is exasperated that I can’t see the big picture. They show me the subtle variances in the vertices as they peak and fall. Each 12-sided figure either leaning, or reaching, or leaping out of the desert landscape. Thin or obtuse, slight or grand as they bloom straight from the ground.

“They’re fractals! The more you zoom in you see the same dodecahedron. Seeds! This shape can configure itself in any way, and even though the shape is similar each dodecahedron is unique.”

Technician one: “All architecture is derivative. These shapes were always there, waiting for someone to bring them out.”

They snap open the tab on their drink as punctuation.  Above us, the atmosphere scoops up orbiting debris and drops it through the sky in flames. Whoever moves here will have a unique villa and a hell of a unique view.