Glitch City is a floating municipality governed by artlaw, as decreed by the official Glitch City Zoning Board (GCZB). It is the express purpose of the Glitch City Zoning Board to ensure that all frustrations and struggles of the creative process, whether heartfelt or absurd, are each afforded adequate layers of aesthetic bureaucracy and governance. This section and subsequent subsections comprise proposed changes and adjusted language to Glitch City building and zoning ordinances. This zoning manual is designed, developed, dictated, and distributed by the GCZB. 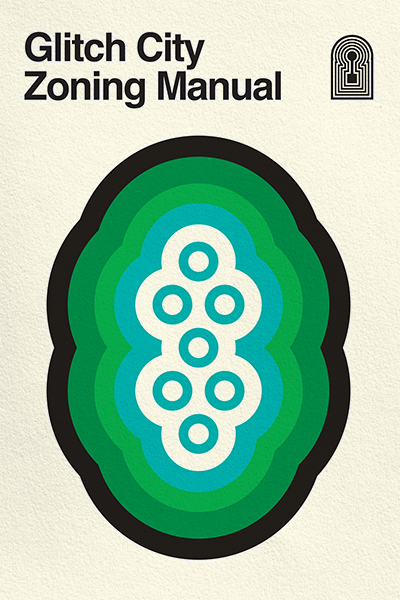 *A second hand dream is constituted as any dream not experienced first hand by the mural proposer. (e.g. “Bartony had a dream with a cool magenta sunset, I, Donson, think it could make a sweet mural.)

SECTION 45M - ALLOWABLE BEATS PER MINUTE BASED ON WORKING HOURS

*The hours between 12:00 AM and 6:00 AM fall under previously agreed upon “Shadow Hours” wherein “anything goes” and “free for all” standards are applied, thus removing allowable beats per minute ordinances during such hours.

As Glitch City is a municipality built upon a pile of floating trash, some materials are eligible for the double trash reimbursement policy (DTRP). This includes any materiality used in construction that is deemed or generally seems to be: recycled; up-cycled; repurposed; pre-purposed then used then repurposed; prefabricated and discarded; abandoned for more than 14 days; left out in more than 3; but less than 6; subjected to rainstorms; materials lost and forgotten; materials lost yet not forgotten but emotionally detached from original source; or materials mostly forgotten and lost – any of the preceding is eligible for reimbursement directly from Glitch City double trash reimbursement funds up to .25 of the original estimated value of the original item at a .10 used mark down estimate.

Note: non-existent material (NEM) falls under the classification of “imaginary” and requires a variance to be implemented in construction under Glitch City zoning laws.

Under ordinance 3948 in a fourth removed clause also designated, as acknowledged by the board, the “subversive expectation of layout rule” (SEOLR), all floors in buildings over three stories tall shall hereby be indefinitely “phased” with the option to be or not to be included in future additions as outlined in the proposed, “What the f*#k? No floors? Cool! Act” (WTFNFCA) introduced, and to be voted on, on a date no later or earlier than agreed upon by the Committee To Vote On The Time Of Voting Committee (CTVOTTOVC). Temporary flooring is permitted during wall construction, but must be removed no later than 50 hours* after vertical material erection is complete.

*The concept of “hours” is subject to change based on the “holder of the hours” (HOTH) whims, particularities, and personal or private feelings on subjects that may be or may not be known in reference to effective change of hour stipulations.

Upon receiving a letter* from, in section 1213VBDB to be designated as “unnamed source” but later to be printed in full, the zoning board has decided to, without delay, but subject to a hold, proceed with a declaration of the “Emergency Counterbalance Measure” (ECM) to ensure the stability and upright nature of the island that is designated as Glitch City, which fits the specifications of a floating island of trash, and the surrounding areas including, but not limited to the artist inhabited residential dwelling region (AIDR). Letter of inquiry is viewable in liner notes, but does not necessarily represent the views of the zoning board beyond the adjustable actions deemed necessary by the board in regards to the counterbalance measure previously stated in prior language of section creation or amendment.

I am an artist and resident of Glitch City and I am writing this letter to inform you that my backyard is dipping into the ocean. We have seen a large number of new artists move here (don’t get me wrong I’m thrilled about this!), but since the island is a pile of floating trash, major additions to either side of the island can cause the entire landmass to become imbalanced, which leads to sides of the island sinking into the ocean. This is exactly the situation I am in. I ask the board to call an emergency meeting to create a counterbalance initiative to prevent our DIY island from sinking on any side or, gods forbid, flipping over entirely.

The Color Scheme Reduction Measure (CSRM) effectively reduces the implied coordination of any color or colors by lifting the necessity to, in tandem, present colors together with or without foresight of how previously stated color or colors will appear aesthetically thus making any combination of colors completely acceptable.

NOTE:  Though the CSRM eliminates the objectivity of synergetic compilation wherein colors are concerned and applying to future concern, color combinations that have previously been identified as “dope” or “good looking” are acceptable, such as “pink and teal”.

LETTER TO THE ZONING BOARD

I’m a Civilian Artist of Glitch City. This letter is regarding an ordinance relating to the artist’s housing in Glitch City, specifically the Outward and Upward Facing Color Mandate (OUFCM). Many of the artists feel that, while a colorful aesthetic to the housing structures is generally a good idea, the assignment of color choices should fall under the purview of the artists themselves. For instance, my abode falls under the surprisingly strict Pink Roof Only Micro District (PROMD). Furthermore, the same micro district only allows for teal walls. This color combination does not work for me. To be a successful creative I need to feel inspired and empowered and my current housing situation does not allow for either of those things. I call on the Glitch City Zoning Board (GCZB) to lift the OUFCM restrictions and allow for an Immediate State of Autonomy (ISA) where the artist housing of Glitch City is concerned. I believe it is time to hand the reins over to the artists who continue to create and maintain our beloved Glitch City. Thank you in advance for your consideration regarding the abolishment of this restrictive mandate.

P.S. We need to talk about the inhabitability of the high rise buildings in the downtown district of Glitch City. Yes they’re cool and yes they’re pretty, but what is really the point of them? The WTFNFCA was a funny idea that somehow got through several voting sessions and became an upheld act. Confounding to say the least. I’ll be penning a separate letter to address this wasteful and absurd zoning requirement.